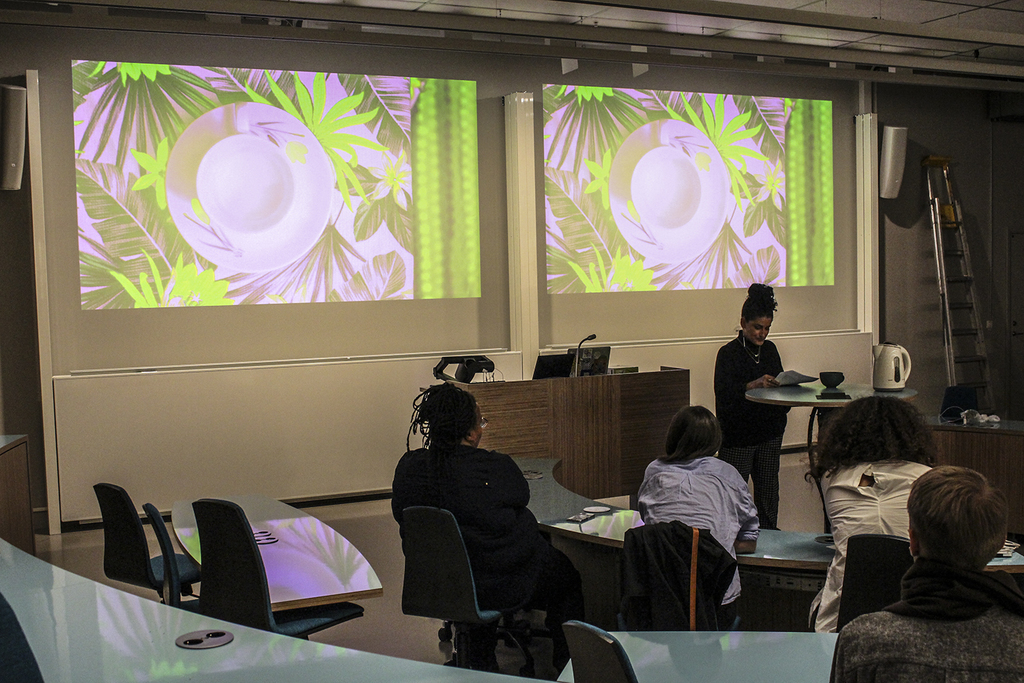 For the exhibition Herbarium, the artist Luiza Prado decided to produce an artwork that explores the use of Caesalpinia pulcherrima. This beautiful plant, native of tropical regions of the Americas, has been used extensively by humans in different ways for centuries. In indigenous tribes of South America, women used it for its ability to cause abortions.

When did your interest about Caesalpinia pulcherrima started?
I first came across documentation of the uses of this plant during my doctoral research. During European occupation of the Americas, an infusion of this plant – known as ayoowiri in some indigenous communities in South America – was often used as a contraceptive and, in stronger doses, as an abortifacient by enslaved Indigenous and African peoples. Knowledge about the properties of the plant, and how to use it – something that is fundamental when you talk about herbal abortion and birth control – was transmitted orally within these communities. This was knowledge to which few Europeans were privy; a notable exception is Maria Sibylla Merian, one of the first European women to voyage to the Americas for research purposes and who in 1705 published the book ”Metamorphosis insectorum Surinamensium”. In this book, Merian writes about the abortifacient use of the plant by Indigenous and African women, specifically stating that the reason for them to seek the pregnancy termination was the mistreatment that their condition, as enslaved people, brought about. Yet, her knowledge of such plants and their uses was inextricable from the fact that she, too, was a slaveowner. Merian, like other white Europeans, relied on the labor and knowledge of the people she held in servitude in order to access remote locations and document the medicinal uses of plants. To this day, it is her name that is most often associated with the plant. I’ve always wondered about the histories that exist at the margins of this plant’s story; the histories of those who remain unnamed, yet whose knowledge was so instrumental for the survival of their communities.

Is this plant still used today in Brazil?
Abortion is, in 2018, still illegal in the country, and one of the leading causes of death for pregnant persons. Ayoowiri is still used today to treat a number of ailments by some indigenous communities, but these medicinal properties remain largely unfamiliar to most of the population in Brazil. I find this particularly disturbing, given how common this small tree is. Growing up in Rio de Janeiro, I remember seeing this small tree everywhere; in fact, it is part of the official policy of many towns and cities to use it for urban decoration, given that its deep roots don’t disturb sidewalks, and its red and yellow flowers are considered very beautiful.

Will this new work be a part of your project ”A Topography of Excesses”?
Yes, my two contributions to the exhibition – an installation titled ”The imaginary becomes complete on the margins of every new linear projection” after a quote by Édouard Glissant and a short film titled ”As the Flames Engulfed the River” – are both part of this growing body of work. Recently, I launched the online project ”All Directions At Once”, where I explore a format I am calling a GIF essay. In this work, I engage with a number of plants used for abortion and birth control in Brazil; the ayoowiri is present too, of course.

When I first conceived A Topography of Excesses, I had been struggling with the difficulty of doing work that does not merely offer a denunciation of the effects of coloniality, but that is capable of enunciating other ways of being. Emerging from the process of writing a PhD thesis, I had dedicated years to diagnosing and describing the ways in which the management bodies, populations, and the economies that emerge around them constituted the very foundation of colonial power, and how the regulation of technologies of birth control was key to this process.

Thinking about all the ways in which coloniality and capitalism enacts violence over bodies in the Global South is quite emotionally draining; after years of this, I needed to be able to articulate how solidarity and resistance to colonial power take shape, too; how systems of oppression are never met without responses. So, I decided to look toward something that had popped up repeatedly in my research, but that I had not been able to explore further in my thesis: folk herbal contraceptives, which I understand as radical, anti-colonial articulations that hint at new realities, new paths; articulations that resist, to this day, the disasters brought about by 500 years of colonialism, and point toward not only other futures, but other realities altogether.

In ”The imaginary becomes complete on the margins of every new linear projection” and ”As the Flames Engulfed the River”, I examine the effects of colonialism and the emergence of these radical, decolonising knowledges on birth control and abortion from a more personal angle. In the installation, I start from my memories of ayoowiri growing in the banks of the Maracanã river, in my neighborhood in Rio, to speculate on its presence in the banks of rivers that flow through the places where my mother, my grandmother, and my great-grandmothers grew up. We are all from coastal regions of Brazil; my mother, grandmother and I are all from different regions of Rio, and I only have information about one of my great-grandmothers (this, too, is significant: most were migrants, undocumented and unregistered, and had no relatives). The one great-grandmother I know about was from an indigenous village that grew to become a small town in Northeastern Brazil. All of the rivers that were present in these places end, ultimately, in the Atlantic Ocean – a body of water that holds such a key role in the history of colonialism. These histories of movement, migration and displacement, are histories that originate in marginality and errantry – to nod at Glissant; but they are also histories of a successive assimilation to an increasingly Westernized Brazilian society. I was not born in the poverty that my mother lived in, and whose marks she carries with her.

I first started thinking about these trees in relation to the histories of women in my family because there is a story, always told in whispers, that one of us once needed an abortion. I am not going to name who this was, nor give too many details because I don’t think this is my story to tell. At the time this happened, this person was living in poverty; a neighbor came to her help, and gave her an abortion using a herbal preparation. I don’t know what that preparation was, but I always wonder if ayoowiri was used. And I always think how terrifying it must have been for her to do this, going against everything that her very Catholic upbringing taught her. The moment when she chose to do this, in spite of everything, and the help and compassion that she found in her neighbor opened up, in many ways, new realities. This type of radical care amongst communities who have been historically marginalized by coloniality can reframe the past, point toward alternative presents, and create new, plural futures. So, in this installation I reenact the moment when the ayoowiri tea meets the saliva, this moment where new timelines emerge. I’ve used a number of tree branches that I collected around my neighborhood in Berlin (which is, too, in a marginalized part of the city, though I’m starting to see the first signs of gentrification now) to trace the profiles of three rivers: the one that cut through my mother and grandmother’s neighborhood, the one I remember growing up, and the one that flows around my great-grandmother’s town. I’ve set up an irrigation system in the branches from which the tea flows, dripping systematically into a number of cups placed on the floor.

In the short film, I examine my memory of the cycles of ayoowiri and royal poincianas (a plant that looks very similar) in the banks Maracanã river; and a dream I have had where my grandmother – who passed away a few years ago – spoke to me through the plant. In my dream, we learned to speak to each other through the wind, and the way we moved our leaves and fingers along with it. The film is an expansion of the ongoing theme of reframing pasts, presents and futures in ”A Topography of Excesses”. The cyclical, yet fluctuating nature of the trees and the city around them; time as wind, flowing through and with and around our movements; and notions of impermanence and ephemerality are all important to this work.

These last years, you did a lot of research about traditional herbal contraception, especially in the global south. Was it easy for you to find material about this subject?
It might seem odd to some, but yes. There is a lot of knowledge about contraception and abortion that is transmitted amongst people, simply because this is a fundamental healthcare issue. Even for something like abortion, which is illegal, there are traditional medicines – even if often they are euphemistically labeled as remedies meant to ”bring on a late menstruation” or other variations on the theme. So if you ask, lots of people have recipes that they learned from their families, from friends, from the lady at the farmers market, from the neighborhood herbalist, and so on. Everything from papaya seeds to cinnamon, from parsley to rue, from bitter melon to angelica. Of course (and I cannot stress this enough!) herbal contraception and abortion require knowledge. You need to know what you’re doing, which part of the plant you’re using, and how – because some of these plants might range from mildly toxic to highly dangerous. It’s not because it’s herbal that it isn’t potentially dangerous. To do this, you need to respect the plants, and understand how they can act in your body.

Unfortunately, with Brazil becoming more and more Westernized, traditional medicine has also become more marginalized. This means that these remedies are often seen as a ”last resort”, something that people use when all else fails – that is, when regular medication is unaffordable, illegal, or otherwise unavailable. In wealthier areas of the country, and for wealthier classes, some of these medicines are perhaps more folkloric than anything else; but for many, these are still remedies for a number of ailments and issues (even beyond birth control) that they could not afford to treat otherwise.